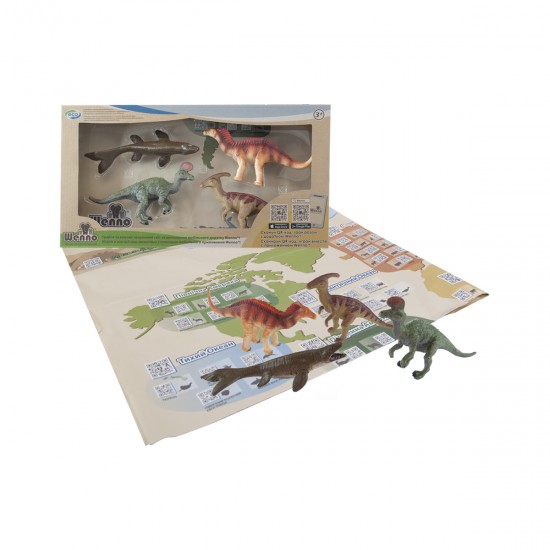 Out of stock
Buy Educational Game Set - Dinosaurs Of The Cretaceous Period wholesale and retail in ubeauty.pro store
Based on 0 reviews. - Write a review
447 грн
Add to Cart
1 click order
Add to Wish List Compare this Product

Features of the development kit:
In the set DINOSAURS of the CRETACEOUS PERIOD you will find such animal figures as parasaurolophus, mosasaurus, lambeosaurus, amargasaurus
The child will get acquainted with predatory reptiles both visually (playing with animal figures) and using modern technologies (an app on a smartphone/tablet, a map with a qr code for each animal)
The learning process will allow you to spend a pleasant time with your family
These figurines will make a wonderful collection of wild and domestic animals
QR-card in Ukrainian and Russian languages
The free Wenno app is available for download in the Apple Store and Google Play
By scanning the QR code of an animal on a map through the app, you will learn a lot of interesting facts about its habitat, food type, classification and much more.

Interesting fact: did you Know that the mosasaur in length could reach 16-17 m and was one of the largest inhabitants of the water world in the entire existence of our planet.
Other interesting facts you can find in the Wenno app.

Immerse yourself in the natural world with the Wenno animal figurines. Play, explore, learn!